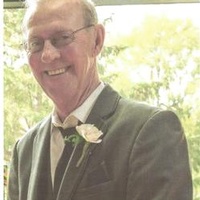 Dwight D. Fallen Dwight D. Fallen, 74, Cooperstown, ND died Tuesday November 21, 2017 at Sanford Hospital in Fargo, ND. Dwight was born October 30, 1943 in Sutton, ND to Claude and Berga (Urban) Fallen. He grew up and attended school in Sutton, ND. Dwight served in the U.S. Army from 1962-1964 and was stationed in Fort Still, OK. After being honorably discharged, he lived in Sutton, ND. On June 2nd, 1967, he married Helen Saxberg and they lived in Cooperstown, ND. They have four children together. Dwight worked as a truck driver for Melroe/Bobcat from 1968 until his retirement in 2001. Dwight moved to Bismarck, ND where he met Barbara Oster and they were married in 1981 and have two daughters together. Dwight enjoyed spending time with his children, grandchildren and friends. He enjoyed camping, boating, fishing and golfing. He is survived by his 6 children, Darrin (Kayla) Fallen of Buffalo, ND, Shari (Jeff) Reiten of Cooperstown, ND, Jason Fallen of Cooperstown, ND, Tracy (Brad) McCullough of Cooperstown, ND, Kristin (Mike)Vetter of Bismarck, ND, and Jennifer (Andy) Sauer of Plymouth, MN. He has ten grandchildren, Nick, Brooklyn, Emma, Cannon, Hayden, Abigail, Callie, Kaylynn, Taylor and Riley, one sister Gloria (Robert) Johnson of Sutton, ND, three nephews and two nieces. He was preceded in death by his parents, two sisters, and one brother. Dwight will be greatly missed by his family, friends and his dog Charlie. Visitation will be Sunday, November 26, 2017 from 12:30 till 1:30 pm in the Quam-Plaisted-Cushman Funeral Home in Cooperstown, ND followed by A Memorial Service at 1:30 in the Funeral Home. Interment will be in the Cooperstown Cemetery, Cooperstown, ND.
To order memorial trees or send flowers to the family in memory of DWIGHT D. FALLEN, please visit our flower store.