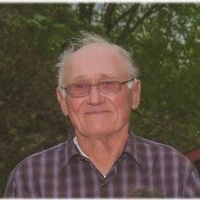 
Leo was born in Cooperstown Twsp., Griggs Co., ND, September 9, 1935 the son of Clarence and Minnie (Gunderson) Edland. The family would soon move to the farm’s current location in Washburn Twsp. along with his adopted brother Russell. Leo would attend rural school through the 8th grade before attending Cooperstown High School, which he graduated in 1953. While attending school he would learn the trade of farming and working with his dad and brother.

The following years the farm would grow with Clarence, Leo and Russell starting a new business building roads, ditches, dams and preparing building sites. Leo became adept at fixing, repairing and welding. There wasn’t much he could not fix or weld.

On December 28, 1960 he married Beverly Sorenson in Dazey, ND. They would have a son Todd who would continue the Edland farm. Even though he was retired, he helped Todd and his grandsons Caleb and Ben learn the farming business.

The later years were sometimes difficult with his asthma, but they were also the best times with his daughter-in-law and grandsons, along with his wife and son. With Todd’s marriage, Leo gained a new close friend, Rebecca’s dad Dale Paul.

Leo was liked hunt, fish and play ball with family and neighbors, attend family events and visiting with neighbors. He was a longtime member of Trinity Lutheran Church, confirmed in 1950.

He is survived by his wife, Beverly; son, Todd (Rebecca); grandsons, Caleb and Ben; Nephews, Ron and David; many cousins and friends.

Leo was preceded in death by his parents and step brother, Russell.

Visitation will be Friday, January 12, 2018 from 12:00 – 1:00 followed by a Memorial Service at 1:00 pm in the Trinity Lutheran Church, Cooperstown, ND. Interment will be in the Ottawa Cemetery, rural Aneta, ND in the spring.
To order memorial trees or send flowers to the family in memory of LEO EDLAND, please visit our flower store.