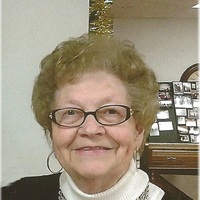 She was born to James and Annie(Torgerson) Johnson on December 26th, 1932 in Bottineau, ND. She graduated from Bottineau High School in 1950. She then attended the School of Forestry in Bottineau for one year.

Adeline worked at The Boy Scout office in Fargo, Diane's, a womens clothing store, Lad and Lassy and the Griggs County Courier.  She was actively involved in Zion Lutheran Church until her health prevented her from continuing to do so!

Adeline enjoyed traveling and made several trips to Norway, a once in a lifetime trip to Korea as well as many locations in the United States.

She was preceded in death by her parents, 2 brothers, 1 sister, her son Steven and great granddaughter Aries.

To order memorial trees or send flowers to the family in memory of ADELINE J. BERGE, please visit our flower store.