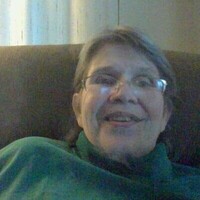 Amoret was born Amoret Carol McCullough in Fargo, ND. She began attending NDSU summer classes while in high school, entering UND at 17 as a Jr. She was interested in theater among other topics and graduated with a Bachelors in Communication.

In 1971 she married Duane Fish of Karlstad, MN. They traveled at the dictates of the army, including a year in Germany, and eventually settling in Grand Forks, ND. She remained active in community theater after her divorce. She worked at Olson's Garden Center, rising to manager before eventually buying the business with her second husband James Hinkley, whom she married in 1988. Later, they moved to Minneapolis to be closer to her daughter Elizabeth, where Amoret worked as an office manager and then in computer technical support. She returned to Grand Forks, where she worked for Amazon before her retirement in 2012. S

She was a master gardener, quilter, photographer, and cook. She died of natural causes at home in Sharon, ND.

Preceded in death by her mother Dorothea McCullough and father Starling McCullough.

To order memorial trees or send flowers to the family in memory of AMORET HINKLEY, please visit our flower store.