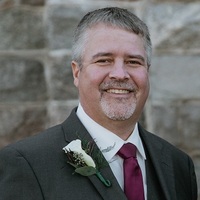 Chad was born September 10, 1972 to David and Judy (Anderson) Zimprich in Cooperstown, ND.  He grew up in Cooperstown attending CHS graduating in 1991 as Salutatorian of his class.  He went on to attend NDSU earning his Bachelor’s degree in Biotechnology.  He worked at the NDSU lab before his move to Wisconsin.

In his youth he enjoyed 4-H competitions, riding horseback, farming with his dad and grandfather, and raising fox on the family farm.  His interest in fox using genetics to determine potential colors helped determine his profession in biotechnology leading him to Promega Corporation as a Research & Development Scientist in Madison, WI at which he worked for 23 years.  Over the course of this employment Chad was involved with numerous publications, patents, etc.  He was also a professor of biotechnology for numerous years through Promega.

He enjoyed hunting with his dog Codie, fishing, grilling, riding his Harley, cooking & visiting the family farm.  His friends and family were very important to him.  We are grateful for his career at Promega that was able to make significant contributions.

Visitation will be Saturday, July 16, 2022 from 2:30 till 4:00 pm in St. George’s Catholic Church, Cooperstown, ND followed by a Christian Burial Mass at 4:00 pm.  Interment will follow in St. Lawrence Cemetery, Jessie, ND

To order memorial trees or send flowers to the family in memory of CHAD ALLAN ZIMPRICH, please visit our flower store.