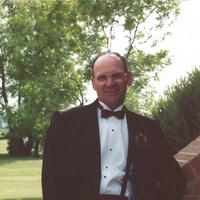 Clarence “Kelly” G. Peterson, 89, Cooperstown, ND, passed away peacefully at his home surrounded by his loving wife and family under the care of Red River Hospice.

Kelly was born Dec. 11, 1929 on the farm near Finley, ND,the son of William and Cora (Johnson) Peterson. He completed 8th grade of school before working for several area farmers growing up.  Kelly served in the Army from 1951 to 1953 serving in the 40th infantry division in the Korean War.

Kelly married Bonnie(Riley) and had a daughter, Kim. Kelly married Peggy(Sitte) on March 16th, 1984 at his farmstead rural Binford, ND. Together they raised four children.

Kelly enjoyed the simple things in life: warm beer on a hot day, flannel shirts year round, many card games, copenhagen, many sweets especially orange slices and chocolate covered cherries and loved his dog Scooter.  He was a master of mechanics but couldn’t pound a nail straight.  He enjoyed tinkering on his John Deere model A and B tractors. He enjoyed teaching his kids and grandkids how to drive, mow the yard, play pinochle and picking every last dandelion.

There will be a Private Family burial held at a later date.

To order memorial trees or send flowers to the family in memory of CLARENCE PETERSON, please visit our flower store.