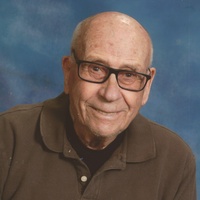 Clifford W. Anderson of Cooperstown, N.D. passed away Thursday, January 31, 2019 at the age of 92 in Sanford Hospital in Fargo, N.D.

Clifford was born July 31, 1926 in Griggs County on the family farm to John and Effie Anderson. He attended Bridge Country School in Washburn Township, graduated from Cooperstown High School in 1944 and later attended NDSU taking a short course in Agriculture. Clifford was confirmed at Hofva Lutheran Church and was a faithful member of Trinity Lutheran Church in Cooperstown.

Farming and raising cattle was a big part of Clifford’s life and he continued to farm until the age of 85. After retiring, he would often be seen driving throughout the countryside in his little Smart Car on Crop Patrol.

Clifford married Ovidia Soma Thompson on July 26, 1979. To this marriage, Clifford became step-dad to Ovidia’s six children. Clifford and Ovidia enjoyed traveling during their year’s together, taking trips within the United States, and also to Europe, Norway and the Holy Land.

Clifford was a member of the Knights of Pythias, served on the board for Griggs Nelson Mutual Insurance and also the Ness Church Cemetery Association board. He was a generous blood donor and volunteered through the age of 92 delivering meals on wheels with his friend Les Stromme.

Funeral services will be held on Thursday, February 7, 2019 at 11:00 a.m. at Trinity Lutheran Church in Cooperstown, ND with visitation being held Wednesday evening from 5-7 with a prayer service at 7:00 p.m. at Quam-Plaisted-Cushman Funeral Home in Cooperstown.  Interment will be in the Ness Cemetery, Cooperstown, ND in the spring.

To order memorial trees or send flowers to the family in memory of CLIFFORD ANDERSON, please visit our flower store.