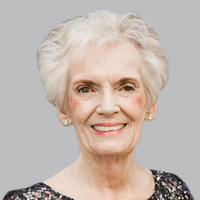 Darlene Rose Paintner Westergren passed away on December 8th, 2021 at the age of 83, in Louisville, KY.

Darlene, the daughter of Frederick William Paintner and Alice Jensina Holter Paintner was born on July 16, 1938 in Hannaford, ND.  She lived in Cooperstown ND, and graduated from Cooperstown High School.  She met and married Ronald Westergren while he was stationed at Finley Air Force base.  They were married on March 2, 1957 at St George’s Catholic Church in Cooperstown.  The couple moved to California after the birth of their first child and eventually settled in Fremont, CA.

Darlene earned her Bachelor of Arts in Education from San Jose State University and then continued on to earn her Masters of Education from the University of San Francisco.  Darlene dedicated her life to education; she believed every student had a gift and it was her challenge to help each child be successful.  She retired from the State of California’s school district after 30 years of service as a teacher, principal, and administrator.

Darlene was strong in her faith and active in the Catholic Church. She took on the role of Eucharistic Minister, held various committee positions, and participated in volunteer activities. Darlene loved to travel, and her passion for art and culture took her around the world to explore and learn.

Darlene is preceded in death by her husband, Ronald; her parents, Frederick and Alice Paintner; her siblings Francis, Delores, and Leonard.

A funeral service will be held at St George’s Catholic Church on Friday, January 28th at 3 PM with the burial service at a later date.  Arrangements are under the direction of Quam-Plaisted-Cushman Funeral Service.   Memorial donations may be made to Hosparus of Louisville.

** For a list of local florist go to our resource tab. **

To order memorial trees or send flowers to the family in memory of DARLENE WESTERGREN, please visit our flower store.