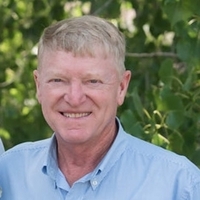 David Murray Stokka, 71, died peacefully in his home on Friday, May 6, 2022, in Fargo, ND after losing his fight with stage IV glioblastoma.  His courageous battle with cancer in recent years showed his unwavering faith when facing life challenges.

He was born on December 19, 1950, to Melvin and Evelyn “Lue” (Berge) Stokka, in Sharon, ND.  David graduated from Cooperstown High School, ND, in 1968.  Upon high school graduation, David attended NDSU graduating with a degree in Mechanized Agriculture in 1972.  After college, David followed in the family footsteps and began farming in the Cooperstown/Binford area with his brother, Butch and raised Gelbvieh cattle until 1996.  He then worked for Right-A-Way Applicators becoming Operations Director until his retirement in 2016.

David met the love of his life, Liz, the summer of 1972, while she was waiting tables at Red Willow Resort.  He married Elizabeth Pfeifer in 1975, and they started renovating their farmstead near Sutton, ND. Together they had 2 children, Nathan and Gretchen.

David had many passions.  He enjoyed reading, hunting, running, golfing, going to Twins games, and watching his children and grandchildren play on the farm.  Two of his biggest loves though were music and flying.  He enjoyed all aspects of music: playing the guitar, singing with Beth, and playing in the Stokka Family bluegrass band with his siblings.  His love of flying began early on with making large model airplanes to fly around the farm, to learning to fly himself and turning some of the farm into a runway complete with a plane in the quonset, to taking it one step farther and becoming a flight instructor himself to pass his knowledge and passion on to others.

He is preceded in death by his wife, Elizabeth (Pfeifer) Stokka; brother, Milton Stokka; parents, Melvin and Evelyn “Lue” Stokka; and his father-in-law, Raymond Pfeifer.

A Visitation will be held from 5 p.m. to 7 p.m. Thursday, May 19th at Quam-Plaisted-Cushman Funeral Home in Cooperstown, ND, with a Prayer Service at 6:00.   The funeral service is scheduled for 11 a.m. Friday, May 20th at Trinity Lutheran Church, Cooperstown, ND with Interment immediately following at Saron Evangelical Free Church, rural Cooperstown.

To order memorial trees or send flowers to the family in memory of DAVID STOKKA, please visit our flower store.