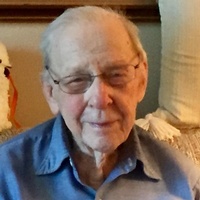 Delmer Paulson, 93, peacefully passed away Friday, December 22, 2017 with family at his side.

Delmer was born on November 15, 1924 in the Alsen/Hampden area of North Dakota, to Christ and Theresa (Reddemann) Paulson, the 7th of eight children.  Delmer moved with his family to Devils Lake and then in 1929 to Pickert (rural Finley), North Dakota.  He attended school through 8th grade at the country school in Pickert.  He attended and graduated from Cooperstown (ND) high school while living and working with his sister, Olive Shelstad and her family at the creamery in Cooperstown.

Delmer joined his father and brother, Roy, working their Pickert farm, raising small grains, cattle and hogs.  Delmer was a member of St. Petri Lutheran Church which was located on the driveway to his farm. For several years he drove school bus with his brother Roy converting the bus to a sled in the winter, pulling the “bus” with horses. Delmer served as a director on several local boards including the St. Petri Lutheran Church board and as a Steele County Commissioner.  He was an avid sports fan, especially baseball and the Detroit Tigers. He enjoyed planting and tending large flower beds of colorful annual flowers on his farm.

Delmer moved into Hope after retirement from active farming and then to Minnetonka, MN in 2012 to be closer to his sister, RhodaJean Westervall, and her daughter, Jan and family.

Delmer was preceded in death by his parents, Christ and Theresa, and siblings, Roy, Earl, Leila Hancock, Olive Shelstad, Elsie Howes, and Leland.

A Celebration of Life will be held this spring, on Thursday, May 24, 2018 at 10:30 AM in the historic St. Petri Lutheran Church building, located on the Steele Country Museum grounds in Hope, North Dakota.  Lunch will be served at the Hope Senior Center following the service, with Committal at the St. Petri Cemetery, rural Finley, after the lunch.

In lieu of flowers, memorials are suggested to Redeemer Lutheran Church, (Hope, ND) or the Steele County Museum (Hope, ND).

To order memorial trees or send flowers to the family in memory of DELMER PAULSON, please visit our flower store.