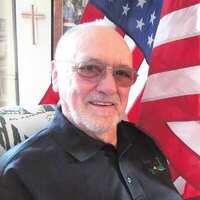 Dennis Royce Lindstrom was born on 8 July 1938 to Eleanor (Johnson) & Maynard Lindstrom in Grace City, ND. He passed away on 21 May 2022 at the age of 83. Dennis has a son Kully Lindstrom from a previous marriage. He married Karen Marie Neva on 29 July 1963 in Tacoma, WA. To this marriage, they were blessed with daughter Tina, son Chad and daughter Brett.

Dennis attended all of his school years in Grace City, ND and went on to college for 2 years at Valley City State Teachers College in Valley City, ND. He was part of the 1958-1959 wrestling team that was inducted into the Viking Hall of Fame in 1991.

During his 11 years in the Army, he served in the USA, France, Korea, Germany and Vietnam. After his honorable discharge in 1971, they moved to Finley, ND and made that their home. Dennis worked at the Finley Lounge, Finley Farmers Elevator for 27 ½ years, then managed the Press Box. He was one of the first EMT’s in training to be able to get an ambulance in Finley. He also served many years on the Finley Fire Department. He was the auditor for the City of Finley and also a Commissioner for Steele County. His recent jobs up until his death were Veteran’s Service Officer, Finley Legion Commander and Squad Leader, Sexton of Finley Cemetery, Finley Improvement Gaming Manager and President of the Steele County Food Pantry. His most recent achievement was presented to him on 19 May 2022, when he received the 2022 Finley Community Service Award for Finley’s 125th Celebration.

He was very proud to serve all Veterans and members of the Military. He enjoyed hunting and fishing all of his life. One of his favorite past times was watching his Green Bay Packers, NDSU Bison, and the New York Yankees. He enjoyed watching his kids, grandkids and great grandkids in all of their activities. He was a man that served his Country, State, County, City and never expected anything in return, but his family always came first.

Survived by his wife Karen of 58 plus years, his children Kully (Vanessa), Tina (Darryl) Nitschke, Chad (Angela), Brett (Ben) Gullicks and 11 Grandchildren and 18 Great Grandchildren. Dennis and Karen were proud to have been able to raise three of their Grandchildren Dallas (Jessica), Brandin (Stacy), and Krystal (AJ). He is also survived by his sisters JoAnn, Jannelle, Debra and brother J, as well as many loved nieces and nephews.

In lieu of flowers, please make your memorial donations to Finley Legion, Finley Cemetery or Hospice of the RRV.

To order memorial trees or send flowers to the family in memory of DENNIS LINDSTROM, please visit our flower store.