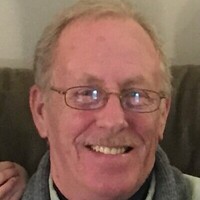 Denny grew up in Cooperstown ND as the red headed middle child of the “Lura Boys”. Denny attended Cooperstown elementary and high school graduating with the class of 1967. While there he was a member of the National Honor Society, served as a football student manager and was a member of the 1966 State Basketball tournament team. Denny was very active in high school with church serving as the Luther League president and regularly singing in church choir. He often sang in quartets both at Trinity Lutheran Church and in high school groups and throughout his life. He then attended NDSU graduating in 1971 with a degree in Biology! In college he was a member of ROTC and a brother in the Delta Upsilon Fraternity. He was a Bison fan and a (fanatic) for the Minnesota Vikings, always analyzing what could have or should have been from year to year.  Denny liked to hunt and fish especially in the Minnesota Lakes area.

After he graduated from college, Denny moved to Hawaii near his big brother David. Denny frequently reminisced about his time there, he worked as an assistant for a plastic surgeon, surfed, did some scuba diving and sang with the Honolulu Barbershop Chorus which he enjoyed immensely! It was there met his wife, Lynne.

After getting married and moving back to the mainland, he worked in Cardiac research with the VA hospital. He would go to MN and settle in the Twin Cities. He worked at the U of M vet school and was a man who was committed to Vikings football, new technology and hot ham and cheese sandwiches.

His daughter remembers him as a wonderfully stubborn Norwegian man who whistled in the morning while he enjoyed black coffee and hot buttered toast, sometimes smeared with peanut butter which is excessive but now she can’t have it any other way. He taught her to pursue her interests with enthusiasm and to continue to learn.

When his marriage ended he moved back to Fargo in 2000 and worked at a variety of jobs the last of which was with Lutheran Social Services. His friends remember him as gentle, witty and an easy-going friend. Denny was clever and intuitive, uncomplicated and extremely introverted and we will miss him in this life.

Denny is Preceded in death by his parents and best friend and cousin Greg Wallander.

Everyone who knew Denny is asked to celebrate his life in their own way, raise a glass, do a random act of kindness or simply reminisce. Any memorials in memory of Dennis may be offered to Trinity Lutheran Church Cooperstown ND or the Cooperstown foundation.

A celebration of life will be held on a later date in Cooperstown.

To order memorial trees or send flowers to the family in memory of DENNIS LURA, please visit our flower store.