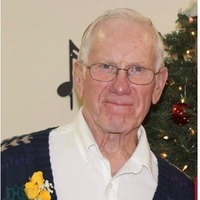 Donald Lynn Anderson was born on December 7, 1941 in Hope, ND to Reinhold and Gladys (Gunkel) Anderson. He attended grade school in Hope through the 4th grade until 1952 when the family moved to Detroit Lakes, MN to be closer to his father’s work. He graduated from Detroit Lakes High School in 1960.

After graduation, he returned to Hope and worked on the Val Huschka farm until 1963. In November 1963, he received his draft notice for the Army and reported to Fort Leonard Wood, Missouri for basic training. He was honorably discharged only a few days after arriving due to his eye sight; they declared him legally blind.

Don returned home to Detroit Lakes and went on an adventure of a lifetime driving his sister, Darlene and her 4 small children back to their home in Kodiak, Alaska where he stayed and worked construction for 2 years. He came back to Minnesota and attended Auto Body school. In 1967, he moved back to Hope and worked for a year at an Auto Body shop.

Don married Doris Headdy on October 9, 1970. He loved her 2 sons, Brian and Eric as if they were his own and he raised them that way too. They had one daughter together, Julie.

During the remainder of his working years; he worked in 2 grain elevators, The Hope School as janitors with Doris and owned his own Semi-Truck business.

In 2012, Don finally retired at the age of 70 from the City of Hope after being their maintenance man for 20 years. He took pride in the city his heart was always in. He got up at 2:00 a.m. and started the snow removal for the business’ to be cleared before they opened and most of the streets at least had a path down them for people to get to work.

Don loved fishing and hunting with his friends and son-in-law. If you wanted to know where the fish were biting or the deer were at, just call Donny as everyone knew he was the man for both. He was very active in the Hope American Legion and Hope Fire Department.

3 sisters, Mary Lou McCollum of Detroit Lakes, MN, Darlene Wilson of Kodiak, AK and Shirley Anderson of Aurora, CO; brother, Merlin Anderson of Audubon, MN and brother-in-law, Winfred L. (Kathy) Headdy, of Grand Junction, CO; many cousins, nieces, nephews and many friends; along with his best friend and grand-puppy who is going to miss him dearly, Ruby.

To order memorial trees or send flowers to the family in memory of DONALD L ANDERSON, please visit our flower store.