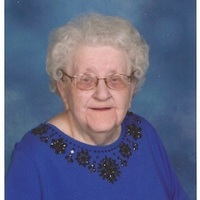 Doris Winnifred Walen was born at home on a farmstead a few miles East of Cooperstown, ND on August 14, 1925.  She was the daughter of J.F. (Fred) and Alma (Peterson) Jensen.   She graduated from high school in Cooperstown.

She met Harry E. Walen and they married on September 26, 1943.  They farmed near Glenfield until they retired and moved to Cooperstown.      They were married for 62 years until Harry passed on April 25, 2005.   She later resided at the Assisted Living Apartments in Cooperstown.    She very much enjoyed being part of that community. She resided there until she transferred to Tufte Manor in Grand Forks.

Doris was an integral part of their farming operations.    The farm included small grains, various types of livestock, gardening and much more.  Doris was the bookkeeper for the operation.    There was always plenty to do.

Doris was an active member of the Glenfield Lutheran Church and later became a member of Trinity Lutheran Church  in Cooperstown.    She loved to play the piano, sing, do large picture puzzles, and water paint.  She also enjoyed working with her church group and various civic organizations.

She was preceded in death by her husband, Harry; her parents Fred and Alma, her brothers, Maynard and Virgil Jensen, her sister Berniece Turnquist, her daughter Vivian Bong, and grandchildren Nathan Bong and Wendy Sather.

Visitation will be Tuesday, June 16, 2020 from 12:00 – 1:00 in the Trinity Lutheran Church followed by a Funeral Service at i:00 on the Church.  Interment will be in the Glenfield Cemetery, Glenfield, ND.

To order memorial trees or send flowers to the family in memory of DORIS W. WALEN, please visit our flower store.