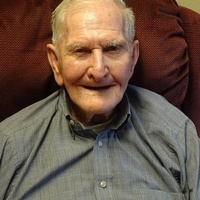 In the early morning hours of December 29, 2018, he peacefully left.

During Earl’s 100 year “dash” (that little line between your birth & death date) he lived!

Born to Knute and Anna Myrtle (Kershaw) Hanson, Kintyre, ND, he was the fourth of six children. Earl’s early childhood was filled with many moves as the family followed his father’s work. Because of this, Earl had a spotty education only attending school when able. However, with much determination, Earl graduated from Hannaford High School in 1938. He was the first in his family to achieve this accomplishment. On September 14, 1940 Earl married the love of his life, Elizabeth (Bette) Shiek of Fargo, ND and remained by her side for the next 78 years, until his passing. They moved to the Hannaford, ND area where he farmed until his retirement.  Earl eventually moved from the farm to enjoy “city” life in Cooperstown, ND. He remained in his home until the age of 98 when he became a resident of the Griggs County Care Center in Cooperstown, ND. Earl was the proud father of 4 children, and was later blessed with 13 grandchildren, 31 great-grandchildren and 29 great-great grandchildren, all of whom he loved to share time with! Earl loved to dance in his younger years, and watch westerns as he grew older. He was a great card player, an accomplished painter/artist, and even created handmade wooden picture frames when he was in his late 80’s. His greatest loves were the 2 F’s… family and fishing…with fishing being his passion, and family being his world.

Earl was preceded in death by his parents, siblings, daughter-in-law Sandy Hanson, and granddaughter Connie Lende.

To order memorial trees or send flowers to the family in memory of EARL V. HANSON, please visit our flower store.