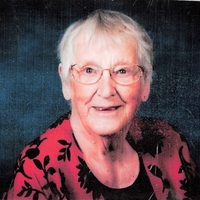 Edith was born April 8, 1921, the daughter of John and Marion (Grotte) Nelson,  She graduated from Cooperstown High School and Valley City Teachers College. She taught in rural one-room schools after graduating and did some part-time teaching in later years.

She married Bertel Lundtrom March 7, 1942. They farmed for over 40 years  in Greenview Township, living the last 33 years on the Family Lundstrom farm.  After retiring, Bertel and Edith moved to Finley.  Bertel passed away on August 31, 1996.  Edith moved to an assisted living apartment in Mayville in March of 2015 and in October of 2018 to the Care Center in Cooperstown, ND.

A love of genealogy lead Edith to trace both her and Bertel’s family trees back to the 1700’s in Norway and Sweden.  A highlight for her was visiting the farm in Skoger, Norway, where her mother was born.

Edith was very active member of the community, 4-H clubs, Council on Aging, Homemakers, Steele Co. Museum, Steele Co. Centennial committee and many others.  She sewed over 250 “Kathy Kaps” for cancer patients who and lost their hair.  In 1996, she was presented with the Finley Community Award.  Edith was a long time member of Hofva Lutheran Church, rural Finley and later joined the Finley Lutheran Church.

Due to Covid 19, no funeral is planned.  A Family Service will be held at a later date.

To order memorial trees or send flowers to the family in memory of EDITH CLARA LUNDSTROM, please visit our flower store.