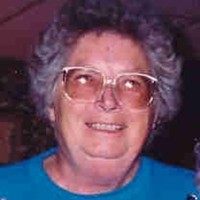 Eleanor was born on June 26, 1924 to Helmer and Alfreda Johnson of Binford, North  Dakota.  Eleanor grew up on a farm near Binford and attended Binford  Schools and was a member of Trinity Luthern Church where she was confirmed.  After graduation Eleanor married her soulmate, Eilert, on November 21,1942. They resided at Mose, North Dakota until his induction into the Army in 1942.

Eleanor accompanied Bud to all of his training facilities including Camp Beale, California, Camp Bowie, Texas, and Fort Knox, Kentucky.  Eleanor returned home to the Binford area after Eilert (Bud) was deployed to the European theater to fight the Nazis.

Eleanor taught in rural schools in Griggs and Steele Counties before attending Valley City State University (North Dakota State Normal School) where she received her teaching degree as well as degrees in Library Science, English and Physical Education.  Eleanor taught English and coached Girl's Basketball in Minnesota and North Dakota schools until 1973 when she accepted full-time employment with Montgomery Ward.

Eleanor and Bud were graced with twin boys, Neil and Terry in 1958 and a girl, Dawn in 1960.  Eleanor and her family moved from Wauben, Minnesota to Devils Lake, North Dakota in 1959 and recided there until Bud retired in 1987. Shortly after his retirement they moved to Cooperstown North Dakota. They spent summers at their property at Mose, North Dakota until Eilert's death in 1993.

Eleanor was an avid reader and was devoted to her church where she contributed many hours to the quilting club.  In addition, Eleanor had many friends and was active in the community.

Eleanor is preceded in death by her husband, Eilert (Bud), her  parents, six brothers, and two sisters. She is survived by two brothers, Walter of Graham, Washington and Mencer of Aitkin, Minnesota as well as two sons, one daughter, eight grand children and three great-grand children.

Eleanor lived at her home in Cooperstown until being accepted to the Griggs County Care Center where she resided until her passing.

Internment will take place at the Nareon (Mose) Cemetery where she will rest eternally with her husband, June 19, 2020 at 11:00.

To order memorial trees or send flowers to the family in memory of ELEANOR RAMSEY, please visit our flower store.