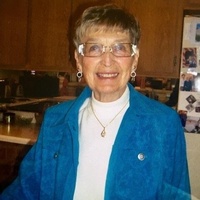 Eleanore C. Brown of Hannaford, ND passed away on January 26, 2019 at the age of almost 96 after several months of failing health at Bethany Home in Fargo.

Eleanore was born to parents Gina and Lars Lerum on March 23, 1923 in Bartley Township. She attended school in Hannaford and graduated from high school there. Eleanore attended Dakota Business College in Fargo and after graduation was manager of Time Finance in Fargo for some time. She was also employed later at Security State Bank of Hannaford.

Eleanore was married to Clinton A. Brown in Moorhead, MN on October 12, 1943. Following Clinton’s return from WWII, they started farming in March of 1946. In 1988 they purchased a home in Surprise, AZ and spent many wonderful winters there with family and friends. After the death of Clinton in 2002, Eleanore, with the help of her children, continued to efficiently manage the farm until she moved to Valley City in 2011.

She was a wonderful homemaker and possessed many talents with all types of needle craft, baking, canning, and along with all this, raised her family and helped raise her sister’s family. Being very active in various church and social groups was a big part of her life. She was also a Life Time Member of the American Legion Auxiliary.

Eleanore will be greatly missed by all who knew her and be remembered for her love of family, generosity and caring spirit.

Funeral services will be held at Bethany Home on University Avenue on Thursday January 31 at noon. Cushman Funeral Home of Cooperstown will be handling funeral arrangements,

To order memorial trees or send flowers to the family in memory of ELEANORE BROWN, please visit our flower store.