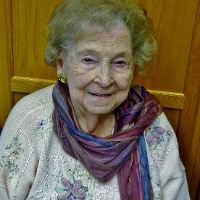 Elizabeth May, lovingly known as Bette, entered this world February 13, 1923. Born to Frank and Hattie (Boyer) Shiek, in Kathryn, ND, she was the second child of nine. Bette grew up in Fargo, ND often taking care of her younger siblings. They were a close family that shared laughter, love, and indoor plumbing. At 17, Bette agreed to a blind date. However, her date bowed out and sent his brother in his place. It was at that time that Bette met Earl Hanson, her true love. Bette and Earl were married September 14, 1940, in Moorhead, MN. They moved to the Hannaford area, and Bette didn't enjoy indoor plumbing again until the 1960's. However, during this time, she did enjoy life! She became the proud mother of four children...two girls, two boys. Oh how she enjoyed being a mom! In addition to being a wife/mother, Bette also wore many work hats while living in Hannaford. One of those hats was being owner of the local cafe. Once she was no longer a business owner, she still enjoyed the cafe scene, as she was a bartender for the Coachman Inn in Cooperstown, ND until her retirement. She became “the best bartender to never taste alcohol”. As her children grew and left the nest, Bette gained the titles of mother-in-law, grandma, great-grandma, and even great-great grandma. In the end, Bette was blessed to head a family of nearly 100! Eventually Bette left the farm to enjoy “city” life in Cooperstown, ND. She enjoyed hosting parties for House of Lloyd/Christmas Around the World, and earned vacations to Hawaii, and Greece. Thru the years, Bette shared her many talents of painting, crafting, baking, sewing, quilting, and more. She enjoyed dancing in her younger years, card parties with friends, playing games with her grandchildren, fishing with Earl, and cooking enough food to feed anyone who showed up! After 94yrs of taking care of home/family, Bette became a resident of the Griggs County Care Center in Cooperstown, ND. She embraced her new surroundings, enjoying activity time, family coffee time, and new friends. She also began to paint again, and continued to share a life with Earl. They shared 78yrs together, until his death in December 2018. Bette reunited with her true love on August 17, 2019. For 78yrs they never spent an anniversary apart...they never will.

Bette was proceeded in death by her parents, siblings, daughter-in-law Sandy Hanson, and granddaughter Connie Lende.

We love you...a bushel and a peck!

To order memorial trees or send flowers to the family in memory of ELIZABETH (BETTE) MAE HANSON, please visit our flower store.