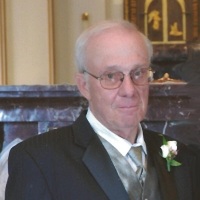 Ernest Peter Fritel was born June 20, 1945 to Rudolph and Catherine Fritel. He was raised on the family farm with his 10 siblings. He attended Little Flower Catholic school and then graduated from Rugby High School in 1963. Following high school he enlisted in the U.S. Army and was deployed to Vietnam in 1964 through 1966. He met Debbie the love of his life, and they were united in marriage September 21, 1968. They lived a short time in Rugby before moving to Carrington in 1970 to pursue his lifelong career of selling auto parts with the H.E. Everson Company. Ernie and his family then moved to Cooperstown to manage and eventually become owner of H.E. Everson. He was very involved in the H.E. Everson company and held officer positions on and off through the years with the company. He continued to work until his recent illness and passing on December 31, 2019.

Ernie was not a man to travel the world, but instead preferred to spend his time in his small community of Cooperstown. He served on the Fire Department for 30 years. He was involved in a variety of organizations within the community and an active member of the St. George Catholic Church.

Ernie was known for his love of sweets. He was fortunate to have so many people in the community who catered to his sweet tooth. He never ran short on goodies. It was not uncommon for Ern to pick up a group of neighborhood kids and take them out for ice cream. Ern enjoyed catching up on the latest news with his buddies in the early morning, with coffee and at the end of the day with happy hour. Ernie also enjoyed the outdoors including hunting, fishing and driving the countryside.

Ernie was preceded in death by his parents Rudolph and Catherine, brother Ed, and nephew Tim.

Visitation will be from 1-3 pm followed by a Funeral Service at  3 pm, Sunday, January 5, 2020 in St. George Catholic Church, Cooperstown, ND.

To order memorial trees or send flowers to the family in memory of ERNEST FRITEL, please visit our flower store.