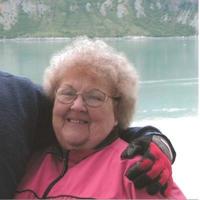 Esther married Warren Peterson September 2, 1949 and they had three chidren, Cheryl, Gary and Michael.  Esther worked at the Windsor Hotel as a waitress, was a farm wife and cooked at the Finley School.

She was preceded in death by, her parents, step-father; brothers, Donald – Bob and sisters, Mildred, Mavis, Leona, Eunice, Helen and Laura.

To order memorial trees or send flowers to the family in memory of ESTHER I. PETERSON, please visit our flower store.