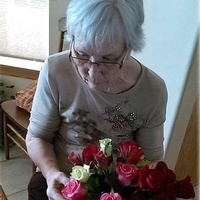 Angie Gaspers (Evangeline E) went to be with the Lord and her loving husband, Jim, on February 12th, 2018.

Angie Semrad was born November 27th, 1929 in Bison, OK.  Her family lived in Oklahoma and Arkansas before moving to North Dakota where Angie graduated from St. Catherine's Catholic High School in Valley City, ND, as Valedictorian of her class.  During and after high school she worked at Mercy Hospital as a nurse's aide.  This experience served her well, as she was often called upon by friends, family and neighbors throughout her life to provide care.

In the fall of 1947 she went to her parents’ home near Hope, ND to help with the area harvest.  During that time she met Jim (James J) Gaspers, who was also helping at the same farm.  Jim and Angie were married in St. Agatha's church in Hope on June 29th, 1949.  After living a few years in the Alice area, then Finley, Jim and Angie moved to the Hope area where they lived the remaining of their nearly 60 years of marriage.  They had six children, Phyllis (Larry) Kemp, Anne (Scott) Gaspers, Mary (Steve) Olson, Carol (Weston) Manifold, Joe (Marcie) Gaspers, and Judy (Pat) Brown. Angie excelled in cooking, baking and gardening.  Her children were amazed at her ability to put together a meal to serve crowds of more than 20 in the spur of a moment.  Her gardens and flowers were enjoyed by the community and often enticed people from surrounding towns to drive through Hope, just to enjoy their beauty.   She taught CCD, was a member of St. Agatha's Guild and was a 4-H leader for many years.  Together she and Jim drove school bus for Hope Schools for more than 32 years.  She was a proud parent, grandma and great grandma.

After Jim’s death in 2008 Angie moved to the assisted living apartments in Mayville, where she was allowed to add many of her beloved flowers.  She enjoyed visiting her many friends at the attached Luther Memorial Home where she eventually moved and received loving care for the past 3 years.

To order memorial trees or send flowers to the family in memory of EVANGELINE E GASPERS, please visit our flower store.