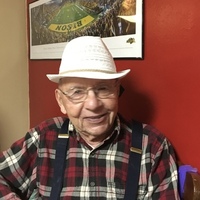 Fritz was born on a farmstead in Southheart, ND, July 21, 1927 to Frank and Magdalena Huschka. He moved to Hope in 1937 in a car full of sheep and attended school in Blabon until the 8th grade. Then he began his love of farming with his dad and brothers. Fritz entered the US Army in 1946 as a Technician, in Company C 42nd Engineer Construction Battalion. He was being transported to Japan and was detoured to Korea. In 1947, he was honorably discharged for family hardship due to the loss of his brothers in WW II.

Fritz married Marvyl (Christianson) October 13, 1951 at St. Agatha’s Catholic Church in Hope, ND. He was a substitute post mail carrier and began farming and raising his family.  He also became a 4-H leader, spent time as a Township Chairman, served on the Cenex Board, and was active in the American Legion. He retired in 1989 and kept himself busy by driving grain truck, gravel truck, and school bus. In 2002, he received an honorary high school diploma.

Besides love of family and farming, he also enjoyed dancing at the Eagles Club, playing cards with his Whist Club friends, bowling, playing poker, and trips to the Casino. When he no longer could do as much, he was always ready for a good pinochle game.

To order memorial trees or send flowers to the family in memory of FERDINAND (FRITZ) HUSCHKA, please visit our flower store.