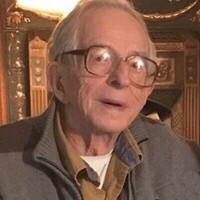 Frank Joseph Heinz was born March 22, 1926 in Cooperstown, ND the son of Frank and Ernestine (Schwarzl) Heinz.  He attended 8 years of county school and graduated from Cooperstown High School in 1943.  Started farming with his brother in 1944.  He was drafted  in 1946 in the Army.  Served in the infantry at Camp Robinson and was awarded the Sharpshooter Medal with a M1 rifle.

After he was honorably discharge with the rank of Corporal he attended NDSU for one quarter in 1948.  Frank took up flying and received his private pilot license for a single engine aircraft.  He married Arlene Pfeifer October 4, 1949, the couple farmed north of Cooperstown until retirement when they moved into town.

Frank was the Tyrol Township clerk for 30 years. Served as director on the Farmers Elevator Board and served on Livestock Shipping Association for many years.

To order memorial trees or send flowers to the family in memory of FRANK HEINZ, please visit our flower store.