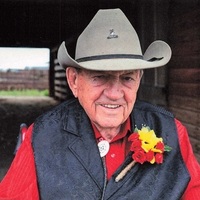 Garfield P. Clemens, 90, Binford, ND passed away on September 10, 2021 at The Griggs County Care Center. A funeral will be celebrated September 15th 2021 at 10 am at the Cooperstown Community building at the fairgrounds in Cooperstown, ND. Buriel will be at the Binford Cemetery.

Garfield Paul Clemens was born on March 12, 1931 in Cooperstown at Mrs. Shays to Harry and Inga (Vangen) Clemens.  He attended Country School and Graduated from Hannaford High School in 1950. He attended summer school in Valley City. He taught at Sheridan County for 1 year before being drafted and serving 2 years in the U.S. Army. He served 9 months on the front line in Korea. He then came home to help on the farm and started teaching again. Garfield taught for 11 years including the last 5 at Binford. Garfield married Angeline Rausch on June 1, 1959.

Garfield married Beverly Paulson August 21, 1999 in Petersburg. They lived at the family farm near Binford until Garfield’s stroke in 2018, they then moved to Cooperstown Assisted living until Garfield entered the nursing home in June 2020.

Garfield’s love of animals and especially horses was well known to all. He had descendants of the first horse he owned when he traded a bike for the horse. He had taken his teams of Babe and Beauty and got 2 teamster awards one in 1995 and one in 1999 at the Winter Show in Valley City. He also was able to take his team Babe and Beauty the last time to the Winter show in 2018 and did the obstacle course in 2018. Garfield enjoyed the outdoors, rebuilding wagons, ranching, farming and working with his horses.

He is preceded in death by his parents, first wife Angeline, two infant sons Jamie and Larry, five brothers Marvin, Gordon, Robert, Dennis and Mahlon, and many of his sisters-in-law.

To order memorial trees or send flowers to the family in memory of GARFIELD P. CLEMENS, please visit our flower store.