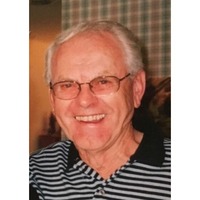 George Winston Vigesaa, 90, went to be with his Lord & Savior on Saturday, April 18 at the Griggs County Care Center in Cooperstown, ND.

George was born on October 11, 1929 to Lawrence and Connie (Watne) Vigesaa in Cooperstown.  He attended rural school, high school in Cooperstown and Oak Grove Lutheran School in Fargo, and Augsburg College in Minneapolis, MN.

He farmed most of his life and served on several boards.  After retiring from farming, he was head groundskeeper at Cooperstown Country Club, where he also enjoyed playing golf. He then worked for a local farmer for 10 years.

George was a tremendous singer.  He was part of a gospel quartet, the Country Four, with his cousins. He also sang solo at hundreds of weddings and funerals.

George's priorities in life were God and his family.  He served Zion Lutheran Brethren Church as an Elder and faithful member.

He adored his children and grandchildren, he & Muriel rarely missed their many sporting events and music concerts.

George is preceded in death by his parents, and his brothers Torkel, Ted and David.

A Memorial Service will be July 3, 2020 at 11:00 am in the Zion Lutheran Church, Cooperstown, ND  followed by a Graveside Service in the Westley Cemetery, rural Cooperstown, ND.

To order memorial trees or send flowers to the family in memory of GEORGE VIGESAA, please visit our flower store.