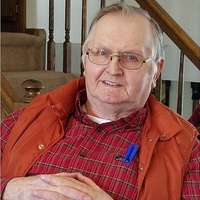 Gerald was born on January 15th, 1940 in Sharon, North Dakota to Ole and Elanor (Mustad) Storebo. Gerald grew up in Finley and graduated from Finley High School in 1959. Gerald proudly served in the US Army from 1961-1963. Upon completion of his military service, Gerald married Ardis Lyste on June 26th, 1964. Gerald and Ardis were blessed with four children; James, Julie, Jerry, and Jan.

Gerald worked at the Air Force Base in both Finley and Grand Forks. He worked with four generations of the Laughlin family. He was a kind and welcoming man who gave so much and expected so little in return. Gerald loved gardening, jigsaw puzzles, attending family events, supporting local athletics, farming, auction sales, visiting with anyone that would listen, and restoring antique tractors.

Due to COVID-19 constrictions, a funeral will be held on May 7th, at the Finley Lutheran Church at 1:00 PM.

To order memorial trees or send flowers to the family in memory of GERALD STOREBO, please visit our flower store.