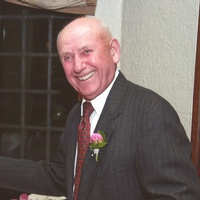 Gordon was born on the family farm in Steele County on May 31,1925 to Ener and Laura

(Peterson) Carlson. He was Baptized in the Sheyenne Valley country church on June 26, 1925

three children on the farm until 1988 at which point he built a house and moved to Finley.

Gordon and Edna loved traveling in their camper to places such as Alaska, Mexico, Arizona,

Canada etc. They enjoyed playing cards, fishing, as well as dancing at the Eagles Club and

anywhere else they could find dances happening.

Gordon was renowned for restoring Ford Model A’s, T’s, tractors and anything else he could

get his hands on! Gordon and Edna did a lot of touring with friends and were well known for

taking part in most parades, which Gordon continued through the years after Edna’s passing.

Gordon was interested in everything, including airplanes, vehicles, music, hunting, and fishing,

but most of all, he loved being a farmer. He was a member, and served on several boards,

including the Township Board, Farm Bureau, Elevator Board, and Eagles Club.

Gordon is survived by one son, Arlan Carlson of MO and one daughter, Marlene Olson

his love of dancing, cards, and socializing. She brought him love and companionship in his

He was preceded in death by his parents; one brother, five sisters; and one daughter,

lifetime. We will all miss his zest for life and socializing wherever he went. He was a well loved

fixture driving around the area in his Model A.

To order memorial trees or send flowers to the family in memory of GORDON CARLSON, please visit our flower store.