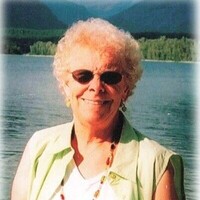 Helen was born July 29, 1939 in McHenry, ND, the daughter of Henry and Lucille (Lamb) Overby. She grew up and attended country school in the McHenry and Binford areas. Helen worked various jobs in Cooperstown, Binford and McHenry.

She married John Manz in 1958 in New Rockford, ND. On September 26, 1966 she married Willie Bakko in Coeur D Alene, ID. In 1967 the couple moved to Granite Falls, WA where she worked for American Building Maintenance as a janitor with her husband, Willie.

During their time in Granite Falls, they were members of a camp club which gave them the opportunity to camp with family and friends. In 1981 they moved back to Binford, ND. On October 27, 2005, Willie passed away.

Helen moved to Cooperstown in November of 2005. Helen enjoyed puzzles, watching TV and playing cards with family and friends.

Helen was preceded in death by her parents; husband, Willie; son, Lyle; sister, Della; uncle, Clarence; daughter-in-law Jeanette; along with aunts and uncles.

To order memorial trees or send flowers to the family in memory of Helen Bakko, please visit our flower store.