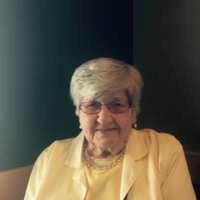 Hilda Viola Palm, 96, Hannaford, ND, passed away the evening of January 10th, 2020, with her loving family at her side, at Valley Eldercare in Grand Forks, ND, where she was being given rehabilitation and then comfort care during the last two weeks of her life.

Hilda was born to David and Lydia (Hofer) Eslinger, the third of eleven children, on August 19, 1923, in Garrison, ND.  Hilda lived her early years on a farm near Coleharbor, ND, and attended school there through grade 7.  She then left school to assist at home with the growing family.  When the farmstead became flooded during the construction of the Garrison Dam Project, the family moved to Akeley, MN, where they ran a theater.  They moved to the farm near Hannaford, ND, around 1940.

On June 22, 1946, Hilda married Lawrel Wilhelm Gordon Palm at the Eslinger family home. They lived at the Palm family farm near Hannaford and raised six children.  She continued to reside at the farm following the death of Lawrel in 2003 and always considered it home, although she did spend much of her last two years in Grand Forks where three of her children live.

She is a member of Faith Lutheran Church in Hannaford, ND and also enjoyed attending Zion Lutheran Brethren Church in Cooperstown, ND with her daughter, Vi. A meaningful bible verse to Hilda was, “Be strong and courageous: Do not be afraid or terrified of them because the Lord your God goes with you; he will never leave you nor forsake you:” (Deut.31:6). The things that were most special to her were her devotion to the Lord and her family.  She served as a 4-H leader for many years.  Hilda loved to cook, sew, knit, and crochet.  She was also an avid gardener and bird watcher.  With skills acquired from both her mother and her father, she was as comfortable in the fields, on the roof of a barn, and in the bottom of a well, as she was in her kitchen.

Due to a pending blizzard the Funeral Service for Hilda has been canceled. There will be a Celebration of Life held in the Spring.

To order memorial trees or send flowers to the family in memory of HILDA PALM, please visit our flower store.