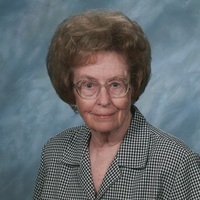 Janis was born November 30, 1923 at St. Luke’s Hospital in Fargo, ND the daughter of James and Charlotte (Jackson) Bailey.  She was baptized and confirmed in Mable Lutheran Church and graduated from Sutton High School in 1941. She spent many happy years growing up on her family farm east of Sutton. She attended and graduated from the North Dakota State School of Science in Wahpeton in 1943.

Janis married her high school sweetheart, Kenneth Hagen, on November 19, 1942, one week before he was called into service by the US Navy. For the duration of the war her home was wherever he happened to be. She worked in Minneapolis at the Federal Reserve Bank for a short time. When Kenny had shore duty she would travel to be near him.  She lived in New Bedford, Pennsylvania, living upstairs in the home of an elderly lady, Mrs. Longnecker, for a period of time.  She then went to Norfolk, Virigina where she worked a desk job at the Quarter Masters Club and taught Sunday School.  When Kenny left for the war she went back to Minneapolis where she worked at the Exchange Insurance Company and lived with her Aunt and Uncle until Kenny returned to the US.  Once he was back they lived in New York City where she worked at Woolworth’s for a short time until Kenny was discharged.

After the war, Janis and Kenny returned to North Dakota where they started farming near Sutton.  They moved to Cooperstown, where they built their home and started their family while continuing to farm.

Her greatest joy was being a wife and mother.  She enjoyed helping on the farm and taking in all the school events of her children and grandchildren.  She was actively involved in Trinity Lutheran Church in Cooperstown and took great pride mowing the farm yard at Sutton.  Kenny passed away in 2006 and Janis continued to live in Cooperstown until the time of her death.  She was a loving mother and grandmother and will be missed by all.

She is preceded in death by her parents, husband, Kenny and an infant son, James Lee Hagen.

To order memorial trees or send flowers to the family in memory of JANIS M. HAGEN, please visit our flower store.