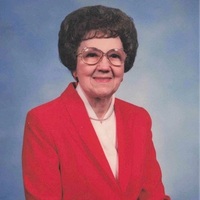 Joan (Morris) Anderson, 97, of Cooperstown, passed away peacefully at the Griggs County Care Center-Nursing Home, January, 27th, 2021 with her family surrounding her.

November 26, 1923 Joan Mercedes (Morris) was born to William & Bertha (Garland) Morris in St. John’s Newfoundland, Canada.  Her fondest memories included family get-togethers, dancing with her husband Alfred and singing and ice skating with her dad, & especially traveling home to Canada to visit her brothers, sister and their families.  One of her greatest inspirations was how kind Alfred and his parents were in making the transition from Newfoundland to North Dakota.  She was educated in St. John’s, NL and worked as a salesperson in the Premiere Garment’s Department Store.  August 12, 1943 she married Alfred Anderson at Cochrane Street United Church in St. John’s where they had originally met.  Joan & Alfred met while he served the U.S. Army while stationed in St. John’s returning to North Dakota in 1945 where they farmed south of Glenfield.  In 1957 they moved to Cooperstown, ND while commuting to the family farm.  Joan was a member of Glenfield Lutheran Church until moving to Cooperstown where she transferred her membership to Trinity Lutheran Church.  She always welcomed tea and coffee guests with such English hospitality.  Joan always desired to be a nurse and with extensive medical training in Minneapolis, MN she was equipped to be Alfred’s personal home dialysis nurse for four years.

Joan was happy for her care given at the Cooperstown Care Center. Visitation will be Friday, February 5, 2021 from 1:00 pm to 2:00 pm in the Quam-Plaisted-Cushman Funeral Home, Cooperstown, ND. A  Private Family Celebration of Life will be held at a later date.   A private burial will be at the Sunset Memorial Gardens in Jamestown, ND .

To order memorial trees or send flowers to the family in memory of JOAN M. ANDERSON, please visit our flower store.