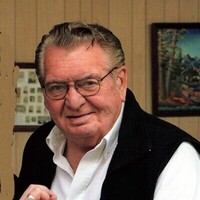 Jack was born September 24, 1931, near Hannaford, ND. He was the son of Hartvick and Violet (Feske) Taxdahl. He attended the rural country school near Hannaford until moving to Cooperstown in 1941. He then started work at the Standard Station where he worked for numerous years. He met the love of his life in 1951, Joyce Leininger, and the two were wed November 28, 1952 and later blessed with three children: Renee, Michael, and Kristie.

Jack and Joyce made their home in Cooperstown where Jack continued to work at the Standard Station as well as other side jobs such as building grain bins, deputy sheriff, and fixing and selling cars. They then moved to Sutton in 1968 where Jack helped his father-in-law farm, as well as buying the Sutton grocery store. In 1971 Jack became the co-owner and operator of the Sutton bar also. During this time Jack continues to sell cars, which he continued to do until he went into the Cooperstown Nursing Home in 2017. After retirement he and Joyce enjoyed collecting and selling antiques at various Flea Markets around the state. He certainly was a “Jack” of all trades.

Over the years Jack liked to buy/sell/trade vehicles, hunt, collect antiques, play cards, visit, and spend time with his children and grandchildren.

Jack was preceded in death by his parents, brother Milo, and sisters Norma and JoAnn.

Funeral services will be Thursday May 26, 2022 at 2:00 pm at Zion Lutheran Church rural Binford, ND. Visitation will be one hour before the service.  Interment will be immediately after the service at the Zion Lutheran Cemetery.

To order memorial trees or send flowers to the family in memory of JOHN (JACK) TAXDAHL, please visit our flower store.