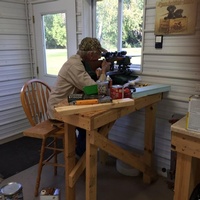 John started his farming career early in life with his father in Clearfield Township outside of Cooperstown. His earliest memory was shoveling manure at the age of three. His first tractor was a Super WD9. He moved many haystacks with it and later he did one tractor pull with his grandson, Jack, with it. In his late teens, he worked as a truck driver and worked in Arizona some winters when not farming. He started a custom spray business in 1965. When his father retired, John and his brother Daniel, started  Paintner Brothers Farms. They built a successful farm and cattle business. In the last few years he had retired to a smaller operation. He first met his wife, Lillian Wells, when they were neighbors as children. Then she worked for him in his spray business. They were married November 22, 1969. They farmed together and raised three children on the family farm. He loved to work in his gun room and spent many hours reloading shells and siting in his guns. He enjoyed hunting and spending time with his family and friends. He spent one winter building a play house for his grandchildren and another he lovingly restored a wishing well his father had made.

He was a strong, caring, intelligent, proud man who could do anything he set his mind to. Few people knew he could type 98 words a minute or play the piano. He had many friends that he spent time with and enjoyed visiting with.

John was preceded in death by his parents.

A memorial service will be held Tuesday Feb 13th at 10:30 AM with visitation from 9 AM to 10:30 AM at St. George's Catholic Church in Cooperstown.

To order memorial trees or send flowers to the family in memory of JOHN PAINTNER JR, please visit our flower store.