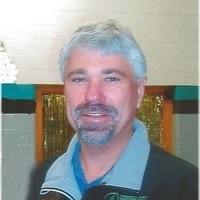 Kevin Haugen passed away unexpectedly at the young age of 51, at the Cooperstown Medical Center, October 7, 2018.

Kevin Leroy Haugen “Chaugy” was born February 16, 1967 to Linda Loge and the late Norman Haugen in Auburn, Washington. After living in Auburn for four years, the family moved back to Hannaford, ND where Norman farmed for several years. Kevin attended Hannaford Elementary and graduated from Cooperstown High School in 1985. After graduation Kevin moved to Arizona to work with his dad. After a couple of years, Kevin returned to Cooperstown where he worked for Harvey Benson at “Someplace Else”.

Kevin married Dana Forde in 1994 and they resided in Fargo, ND. They welcomed their first daughter Kaylie Marie “KK” in 1998, and their second daughter Molly Roberta “Molly-Molly” in 2002. While living in Fargo, Kevin worked for Floor to Ceiling Carpet One. Kevin took pride in his work and he had every reason to. In 2003 Kevin and his family moved to Tolna, ND. There Kevin pursued his passion by creating a partnership, K & J Flooring, with John Walker. In 2007 Kevin moved back to Cooperstown and continued to grow the business. Kevin’s hard work and love for others was reflected in the quality of his work.  Kevin will be remembered through his craftsmanship in the many homes and businesses in the surrounding communities.

However, Kevin’s first priority was always his two girls, Kaylie and Molly. He never missed an opportunity to be at a sporting event, music concert, or any other event his girls may have had. When he wasn’t with his girls, he loved to cook and cheer on his favorite teams; UND Fighting Sioux, Minnesota Twins, and the Denver Broncos. He had a green thumb like no other which was apparent in his garden and the many jars of homemade canned goods that he bartered off to his friends and family. If you were lucky enough to get one of these jars, you were in for a real treat. Although he was taken too soon, it was apparent that God needed a really outstanding gardener.

Kevin is preceded in death by his father, Norman Haugen and grandparents, Oline and Bennie M. Haugen.

To order memorial trees or send flowers to the family in memory of KEVIN L. HAUGEN, please visit our flower store.