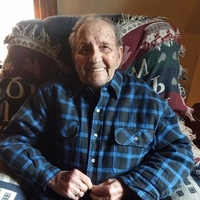 Lawrence was one of two identical twins born May 14,1930 to Edwin and Sylvia Brumberg Everson. They were number 7 and 8 of 14 children born to Ed and Sylvia on a farm near Walum, ND.  He worked on the farm and did some trucking for his brother-in-law Vernon.  He pumped gas and worked with another brother in law Bernard as a mechanic. He graduated from Dazey High School while he was in the Marines.

January 9, 1951 he enlisted in the Marines and was sent to California for training nd then to Korea.  During his time in Korea  he Met up with his twin Leonard who was in the Army .  He was discharged  as Sgt. In January of 1954.

In  December of 1954 he married Elsie Jensen and had six children, Sylvia, Mark, Sharon, John, Kirsten and Loren.   Lawrence worked for Coca cola at the time.  Later he went to work for ADT Security  until he retired.   His first wife divorced him and in 1987 he married Anna Olson, she had three children,  Art, Delores and Donald.    They moved back to North Dakota and made their home on a farm near Bowdon.  During this time    Lawrence  worked with farmers in the area and  raised A hugh garden.  He and Anna would bring fresh produce to his friends and senior  services at Carrington.  In April of   2014 Anna passed away.  Larry continued to grow his Big garden and give to family and friends.  In April of 2019  after a fall he moved to a house in Hannaford, ND where he was living at the time of his death.

A Private Family Graveside service will be held a later date.

To order memorial trees or send flowers to the family in memory of LAWRENCE D. EVERSON, please visit our flower store.