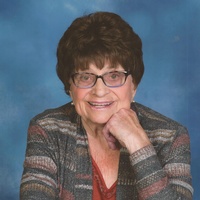 Lillian A. Breckel, 84, Cooperstown, ND died Sunday, December 23, 2018, in the Griggs County Care Center where she had been a resident since November of 2015.

Lillian was born October 28, 1934, in Harvey, ND the daughter of Ervin and Minnie (Riechenberger) Helm.  She grew up and attended school in Martin, ND and graduated as Valedictorian in 1952.

She married Walter Breckel November 22, 1953 in Martin, ND.  Lillian worked at a creamery, was an assistant Post Master in Martin and on a Dairy Farm in Harvey before the couple moved to Sutton, ND where they owned and operated a café.  They moved to Perley, MN where she babysat and worked in a café.  She then worked at Pleasure Products in Moorhead, MN, making bathroom fixtures and later erecting grain bins.  The couple moved to Elizabeth, MN where she worked for Medallion Cabinets. The couple moved to Oakes and later to Honeyford, ND where she was a bookkeeper at the elevator.  The couple owned and operated a bar in Fordville, ND.  In 2008 they moved to Cooperstown, ND.  Walter died in 2009 and Lillian continued to make her home in Cooperstown.

She was preceded in death by her parents, husband, three sisters, one brother and a grandson.

Visitation will be Sunday, December 30, 2018 from 1:00 till 2:00 followed by a funeral service at 2:00 pm in the Trinity Lutheran Church, Cooperstown, ND.  Interment will be in the Fordville Cemetery, Fordville, ND.

To order memorial trees or send flowers to the family in memory of LILLIAN BRECKEL, please visit our flower store.