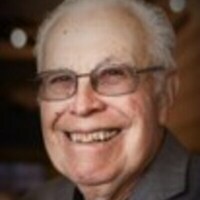 Loren was born April 23rd, 1926, to LeRoy and Minnie (Sommer) Richards in Colgate, ND.  He attended school in Colgate, ND and was valedictorian of his class of 1944.  In December of 1944 he was drafted into the Army.  After basic training at Camp Hood in Texas he was deployed to the Philippines and later was stationed in the Japanese islands where he was tasked with keeping the peace and rebuilding the war-ravaged country.  Loren was in the engineering unit; after two years of service returned to North Dakota and enrolled at the Interstate Business College in Fargo.  One year later he decided to move back to the Hope area and started his farming career.  He married the love of his life, Marian Larson on December 17, 1950.  He farmed in the Hope, ND area for over thirty years and was a lifelong member of the local American Legion as well as a World War II Veteran.

Loren was very active in the communities he lived in serving on church councils and committees; Sheyenne Valley Rural Electrics, North Dakota and National REC, Hope Farmers Union Oil Company, HOA boards and others. He was always more than willing to help in community projects from sodding the local school grounds to planting trees at the golf course to designing and building a new church to name a few.

In 1979, Loren and Marian moved to Mesa, AZ.  In his retirement years, at Sunland Village, he kept busy by doing handyman jobs for his friends and family.

A Graveside service will be held Saturday, July 31, 2021 at 11:00 am in the Hope Cemetery, with full Military Honors.

To order memorial trees or send flowers to the family in memory of LOREN RICHARDS, please visit our flower store.