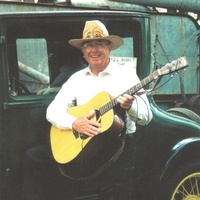 Marion was born September 15, 1919 in Adams County, Illinois to Joseph Gilpin Powell and Sadie (Swisher) Powell.    Marion was raised in the Colgate ND area and graduated valedictorian of his class in Colgate.

Marion was united in marriage to Alice Brock on July 1, 1942.  They moved many times in their early years.  They made their home in Page, ND.  Their next destination was to Chicago, Ill where he attended the Chicago Evangelistic Institute graduating in 1946 as a Methodist Pastor.  They then returned to ND where he began his ministry at Bowbells, ND.  They eventually moved back to eastern ND settling down in the Hope, ND area.   Alice died March 24, 1966.

On July 7, 1979 Marion married Eleanor (Lolly) Juliuson. They enjoyed 18 years together traveling and celebrating life.  Their trip to Sweden was a wonderful adventure for both of them.  Eleanor died January 17, 1995.

Marion retired in 1984 after working at Cenex for 35 years.  He loved the people he saw daily.  He drove School bus for Hope Public School for many years; it kept him young at heart.     Marion was on the Steele County Historical Board and donated his radio collection to them.  He also was on the Hope City Council and Hope Housing board for many years.

Marion was a very devout man who spent hours reading the Bible daily and wore many out in his lifetime.  He was active in the Gideon Association, taught Sunday School and loved working with his church.

Marion was known as a kind and gentle man who loved music, and enjoyed life’s simple pleasures.  He loved old radios, old cars and driving the countryside.

He was preceded in death by his parents, his wife Alice and second wife Eleanor.

Funeral Service will be held at the Trinity Lutheran Church in Hope on Saturday, September 8th at 10:30, with visitation 1 hour prior to service.

To order memorial trees or send flowers to the family in memory of MARION J. POWELL, please visit our flower store.