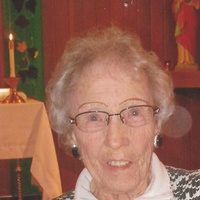 Marlin J. Parkman, Hope, ND, passed away April 25, 2019 at Griggs County Care Center, Cooperstown, ND, where she had been a resident since August of 2016.

She was born January 15, 1932 near Luverne, ND the daughter of William and Irene (Elston) Nash, along with an identical twin sister, Marlis. She grew up on the family farm with her three sisters and attended Luverne Public School.

She married Charles “Chuck” Parkman on August 26, 1951 in Hope, ND. They were married for 61 years. They lived in Bremerton, WA, Great Falls, MT and lived in and farmed near Hope, ND on his family farm. She was known for baking homemade buns and birthday cakes. She enjoyed playing cards, jigsaw puzzles, sewing blankets, knitting and crocheting.  She loved to hunt and fish right along with her husband, sons and grandchildren, going to auction sales and was a fan of all sports. She loved to write poetry and had a few of her poems published.  She was long time member of the Handy Homemakers Club and World of Poetry.  She enjoyed spending time with her grand and great grandchildren.

She was preceded in death by her husband, an infant son, parents, three sisters and brothers-in-law; Doris and Richard Cole, Sylvia and Raymond Eberle and twin, Marlis and Glenn Hanson.

To order memorial trees or send flowers to the family in memory of MARLIN J. PARKMAN, please visit our flower store.