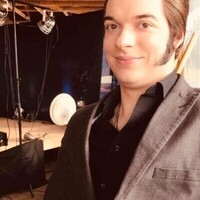 Marqus was born on February 18th, 1994, in Duluth, MN at St. Mary’s Hospital to Byron and Betty Jo Mickelson. Marqus graduated from Superior Senior High School and had attended WITC and Lake Superior College. In 2017 Marqus became a father to Audrey Jo and in 2020 Leo Patrick was born to Marqus and Alexa Abrahamson. He was absolutely delighted to be their dad.

He will be remembered for so many things. Among them were his love of Elvis and performing his Elvis tribute shows, his ability to crack a joke anytime, his pure enjoyment in making people laugh, and as he would say “Don’t forget to mention my exceedingly good looks and charming personality.”

Marqus died October 23rd, 2021, on the battlefield of his own personal conflict but those left behind carry the burden.

He is survived by his children, Audrey and Leo; their mother, Alexa; his dad, Byron Mickelson (Debbie); his mother, Betty Mullikin (George); his siblings, Byron, Paul, twin brother Michael, and Shawn Mickelson; step siblings, Miranda Barclay and Daniel Griggs, Jesse Mullikin and Breanna Mullikin; a multitude of cousins, nieces, nephews, aunts and uncles; a grandmother; and so many friends that seemed as though they were family.

Visitation will begin at 1:00 PM, Sunday, October 31, 2021, at Downs-LeSage Funeral Home, 1304 Hammond Avenue, Superior, and will continue until the 2:00 PM Memorial Service with fellowship to follow. Pastor Victor St. George will officiate.

To leave a condolence or sign the guestbook, please visit www.downs-lesage.com.

To order memorial trees or send flowers to the family in memory of MARQUS ALLEN MICKELSON, please visit our flower store.