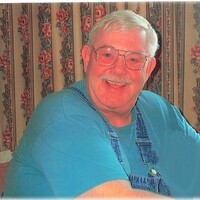 Michael George Fliflet was born March 29, 1947 in Valley City, ND the son of Sam and Sara (Babe) (Bjor) Fliflet.  Mike was baptized and confirmed and is a member of the Faith Lutheran Church in Hannaford, ND.  He grew up and attended school in Hannaford and participated in football, basketball and played drums in the band.

He enlisted and served in the US Navy from March of 1967 to October of 1970.  He served aboard the USS Hornet as a Radio Man.  Stationed off the Viet Nam coast he was involved  in the Apollo 11 & 12 recovery missions.

Mike  married Shirley Reinhart November 26, 1971.  The couple made their home in Hannaford where they raised their three sons.  Mike spent 30 years working for the Burlington Northern Railroad as a laborer, foreman and track inspector and was an active union member.  He retired in 2001 due to medical disabilities.  He was an active member of the Hannaford American Legion Post # 113, Hannaford Wildlife and served on the Hannaford City  Council.  Mike enjoyed hunting and fishing with his brothers and sons, playing cards, Yahtzee, visiting with friends and family, having coffee with the bowling alley crew.

Mike was preceded in death by his grandparents; parents;  mother and father-in-law; two brothers, Joseph and Scott.

The family would like to express the appreciation the Cooperstown Ambulance, CMC, ER and Griggs County Care Center.  A Special THANK YOU to the Hanson boys and Jason Grover for the “pick ups”  etc.

To order memorial trees or send flowers to the family in memory of MICHAEL G. FLIFLET, please visit our flower store.