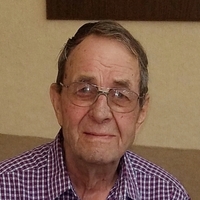 Dick was born an identical twin (Robert) on June 21, 1929 to Alma (Grewing) and Peter Pickar.  They were the first set of twins born at the Wadena, MN hospital.  He attended school in Sebeka, MN through the eighth grade and later obtained his GED.  At a young age, he and his brothers hopped a train and got off near Luverne, ND, where they worked for area farmers.  Dick enlisted in the Army at age 17 (he looked 18) and later deployed to Germany during the Korean War from 1951-1953.

Dick met the love of his life, Eva Huschka, whom he married on June 15, 1953.  They lived in the Hope, ND area and had 4 children.  In 1975, they moved to Pickert, ND where Dick managed and later owned the Pickert Grain Company.

Dick was a devoted Catholic, he prayed the rosary every day.  He was a trustee at St. Agatha’s Catholic Church in Hope for many years and a life time member of the Hope American Legion.  He had a passion for working the land, he enjoyed getting dirt under his fingernails.  When his children were young, he often had the kids stand in the fields so he could gauge the height of the crop.

Dick and Eva were married nearly 60 years until her death in 2013.  They spent many winters in Arizona with friends.  He kept very busy with construction projects and built many “Arizona” rooms.

He looked forward to watching sports, especially the MN Twins and Vikings.  He loved to play cards and cribbage.  Dick made friends easily and could strike up a conversation with anyone.  He loved his family and especially wanted to know what the grandkids were keeping busy with.  He was known for always having a toothpick in his mouth, a substitute for cigarettes many years ago.

Dick married Betty Ramstad in 2014, they lived in Finley until his move to the Veterans Home.

He was preceded in death by his parents; wife, Eva; 4 brothers and 3 sisters.

The family is requesting social distancing and please wear masks.

To order memorial trees or send flowers to the family in memory of RICHARD (DICK) PICKAR, please visit our flower store.