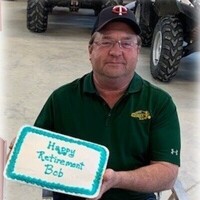 Robert “Bob” Haines, 60,was born in Fargo ND 10/3/1961. He was a terrific  Brother, Uncle, Brother-in-law, cousin, friend and mentor to many, an all-around fantastic guy. He passed away in his home at Red Willow Ranch, Binford ND on December 13th after a brief illness.

Bob graduated from Binford High School in 1980. The next year, he attended NDSU and then Dakota Aero Tech in Fargo. He then switched to Bismarck Jr. College and graduated to become a Lineman.  His next year career was with the ND Department of Transportation in Fargo and the last many years with the ND DOT in Casselton. Bob was a great employee for the DOT and excelled at winning many “Roadeo” Events.  Upon retiring, he moved  back home to Red Willow Ranch, where he originally grew up assisting his parents, William and Vernis Haines run Red Willow Lake Resort. It was a family operation for over 70 years, and during College, Bob spent every weekend at the Resort assisting his disabled father Bill in the operation of the resort and 88 lake lots around Red Willow Lake. Upon his Father’s death, Bob was very dedicated to helping his elderly mom continue to live her dream running the Resort as long as she was able.

Bob was a single, sensitive man and a friend to everyone!  He enjoyed snow skiing, working several winters in  Vail, CO.  Playing baseball and softball at Red Willow. He always looked forward to Coyote Hunting fall and winter, and hosting a large group of friends during Deer Season every fall, which became quite a large annual event. Bob was a huge NDSU Bison Fan, going to several National Championships in Frisco, Texas. Bob will be missed by his many friends and all who knew him!!

The Memorial Service for Bob will be held at Trinity Lutheran  Church in Cooperstown on Monday, December 20th with Visitation at 1:00 PM and Service at 2:00 pm.

To order memorial trees or send flowers to the family in memory of ROBERT (BOB) HAINES, please visit our flower store.