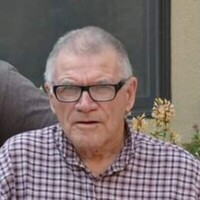 Ronald Edwin Knight, 84, passed away peacefully March 25, 2021 at Mercy Hospital in Valley City, ND after a courageous battle with Parkinson’s.

Ronald was born December 18, 1936 in Page, ND the son of Andrew and Louise (Horning) Knight.  Ronald graduated from Page High School in 1955.

September 28, 1958, Ronald was united in marriage to Marlyn Johnson in the United Methodist Church in Hope, ND.

Ronald spent the first part of his life farming and raising dairy cows and hogs on the Knight Family Farm near Galesburg, ND.  In 1970 Ronald moved his family to Finley, ND where he worked for Braunberger Brothers Construction until he started his own business, Knights Construction.  Ronald was recently a resident of Sheyenne Care Center in Valley City, ND.  He kept the staff on their toes and earned the nickname “Trouble”.

Preceded in death by his parents, wife, brothers and sisters -in-laws.

To order memorial trees or send flowers to the family in memory of RONALD E KNIGHT, please visit our flower store.