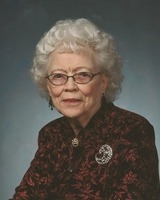 Shirley Lucille Retzlaff, 97, Cooperstown, ND, died Sunday, March 25, 2018 in the Griggs County Care Center, Cooperstown, ND.  She had been a resident there since suffering a stroke in January of this year.

Shirley was born at home on the family farm southwest of Binford, ND on March 21, 1921.  Her parents were Norwegian immigrants Cornelius and Lena (Amundson) Watne.  Shirley had seven siblings, all now deceased, Shirley was the youngest.

Shirley attended country grade school in Addie Twsp, Griggs County.  After finishing eighth grade she worked for a time as household hired girl for families in the Sharon, ND community.

In that time frame she met the fellow who would become the love of her life, Mr. Carrol B. Retzlaff, also of rural Binford, ND.  They became well acquainted at some local dances, enjoyed courtship and were married in 1941.  They had both grown up on farms and began farming careers with Carrol’s parents, Alfred and Julia Retzlaff on a farm nine miles west of Cooperstown, ND

In 1943 they embarked upon their own farming operation that would actually last their whole professional life together.  They rented land and a farmstead in Griggs County south of Cooperstown.  They acquired necessary farm equipment while Carrol held a fulltime job as second man at Shepard Farmers Elevator for a couple of years.  Shirley was a dedicated and skilled partner in their farming enterprise.

They farmed rented land for a few years and added purchased land in 1957, still in Griggs County.  Shirley’s homemaking skills were very significant to their successful venture by preparing and serving meals for everyone including hired men.  She kept an immaculate home and provided sleeping rooms and laundry services for some of the hired men, too and some of this was before they had running water and plumbing in the house.  Also when needed she could and would operate tractors, swathers, combines, milk cows, feed livestock and turkeys and do anything else to keep things going.  During harvest she would bring noon meals out to the field for the workers.  The meals were always delicious and memorable.  Shirley and Carrol and sons were known as farming innovators and were awarded the Griggs County Soil Conservation award in the early 1960’s.

Shirley always enjoyed cooking and baking.  She was an expert at several Scandinavian goodies including lefse.  She loved to play pinochle and she was really good at it.  She and Carrol also belonged to the local square dancing club.  Shirley even tried her voice at calling the square dance.  She enjoyed music and could even yodel and play piano and organ.

Shirley was preceded in death by her parents, Lena and Cornelius Watne, all her siblings, Lillian, Gladys, Mable, Raymond, Chester, Vernie, Stanley, her husband, Carrol and her son Rollie who passed away in September of 2017.

To order memorial trees or send flowers to the family in memory of SHIRLEY LUCILLE RETZLAFF, please visit our flower store.