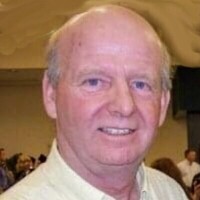 Steven Wayne Dahl, 67, passed away January 17, 2021 at Vibra Hospital in Fargo, ND due to injuries sustained in an October 12, 2020 farming accident near Cooperstown, ND.

On April 3, 1953, Steven was born in Cooperstown, ND to Kenneth and Daisy (Adlard) Dahl.  He grew up on their farm near Cooperstown, graduating from Cooperstown High School in 1971.  Steven was blessed with three daughters: Jennifer, Sarah, and Rebecca (Becky).

Steve’s passion in life was farming.  He devoted his entire life to the land.  After high school graduation he owned and operated a custom combining business for a few years, traveling up and down the grain belt of the US and Canada.  Steve was a dedicated John Deere machinery man and was well known for wearing his green John Deere mesh cap.  He spent time driving over the road semi when not farming.  He had friends all over the nation that he would stop in to visit.  He was known for picking up odds and ends he termed as his ‘treasures’ throughout the US and bringing them home to his farm.  He was well known for his “dumpster diving”.

Steve whole heartedly loved his family and friends.  He enjoyed meals and family get-togethers, running on “Dahl time” as he was always late.  He enjoyed laying on the floor and playing with the kids, first his own children and recently his grandchildren.  He was one proud grandpa.  Jessie, his border collie, remained by his side all day long.  He sensed people in need and aided many people through the years.  Steve loved traveling and spent time yearly in the Philippines.  On most days you could find Steve working in his shop, which he built when he was 21 years old.

Steve was preceded in death by his parents, Kenneth and Daisy Dahl.

Visitation and prayer service will be at 10 am January 30, 2021 at Cornerstone Community Church in Cooperstown, ND with the funeral to follow at 11 am.  A spring burial will be planned at a later date.

To order memorial trees or send flowers to the family in memory of STEVEN DAHL, please visit our flower store.