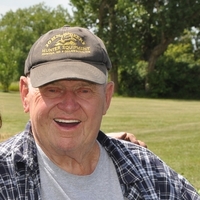 Stuart Wohl, 76, Pillsbury, N.D., and Hope, N.D., died Monday, Dec. 7, in Sanford Medical Center.  Stuart was born October 24th, 1944 to Gina and Alvin Wohl of Brainerd, Minnesota.  Where he grew up and eventually left and headed to Hope, North Dakota.  He began working for several farmers in the Hope area.  Eventually he worked for Ted Nathan where he met his wife Diana.

Stu married Diana on September 18, 1965.  Stu loved her so much he gave her two nicknames being the “Cook” and his “Sweetie”! He was in the army from 1965 to 1967. They lived in Finley where they had two sons Spendy (Tom) and the shorty (Jerry).  They moved to Hope on a farm and eventually moved to Pillsbury. Made a great life and a wonderful home there. Tom and Jerry got married and had children of their own and their kids had nicknames too.  That was Stu! That was our Stu everyone had a nickname.

Stu loved to garden.  He had a corn, potato, and a regular garden that he would tend to in the summer.  Stu had to make sure there was enough potatoes for his family and enough corn to feed everyone in the area.   He loved his gardens.  He had a love for John Deere tractors! You knew when spring came because you would see him driving his Johhny around Pillsbury.  He would take Johnny for a drive to his gardens daily.  Stu was admired as a person with integrity, who was fair, understanding, kind, gentle, patient, selfless, hard-working, and loving.

His pride and joy was his family.  He loved his wife Diana with all his heart. He would have been lost without her. Even though they had TV remote wars with the volume they were there for each other.   He loved his two sons, Tom and Jerry. He was so proud of both of them.  He would tell friends something that each of them had done all the time.  Always their strengths and accomplishments.  His two daughter in laws the daughters he never had.  His four grandchildren that he loved dearly.  His eyes would light up when he saw them and had the biggest smile when they entered the shop!

He was preceded in death by his parents, Gina and Alvin Wohl.

Celebration of life will be May 8, 2021 at 10:00 am in the Hope American Legion, Hope, ND.  Interment to follow with military honors.

To order memorial trees or send flowers to the family in memory of STUART WOHL, please visit our flower store.